All this negative press about the housing market…

WHAT’S RIGHT WITH THE HOUSING MARKET?

There have been quite a few hand-wringing articles lately discussing the problems with housing. Most articles point to some of these suspects:

Oh my, the sky is falling!

The first mistake these writers make is they are asking the wrong question. Of course housing is lagging the recovery because of the residual effects of the housing bust and financial crisis (this lag was predicted on this blog and elsewhere for years – it should not be a surprise).

The correct question is: What’s right with housing?  And there is plenty.

1) Existing home sales were down 7.5% year-over-year in March.  Wait, isn’t that bad news?  Nope – not if the decline is related to fewer distressed sales – and it is.  (fewer foreclosures and short sales).

3) Mortgage credit is tight. Hey, isn’t that bad news? Nope.  There is only one way to go … 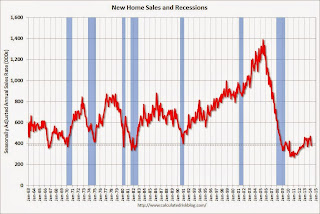 4) New home sales are up significantly from the bottom, but are still historically very low.

There really is no where to go but up.  A growing population will require more new homes.  (I’ll post again on household formation in the future).  The graph for housing starts looks similar.

6)  The impact from rising mortgage rates is mostly behind us.  Economists at Goldman Sachs have found “the effect of monetary policy shocks on [building] permits persists for 3-4 quarters”. Rates increased from around 3.5% in May 2013 to 4.4% in July 2013.  Since then rates have moved sideways or down a little – and the “3-4 quarters” is almost over.

8) The MBA purchase index is skewed by large lenders. Over the last few years, small lenders (many not included in the MBA survey) have focused on purchase applications (they market through real estate channels and charge lower fees than the large lenders). Other data suggests mortgage applications are mostly flat year-over-year.

Housing is a slow moving market – and the recovery will not be smooth or fast with all the residual problems.  But overall housing is clearly improving and the outlook remains positive for the next few years.

Written by Buyer Services Department on May 7, 2014. Posted in Real Estate Blog