… the forecast indicates that home prices, including distressed sales, are expected to increase 10.5 percent year over year from March 2013 to March 2014.

“As the spring home-buying season kicks off, house price appreciation continues to be strong,” said Dr. Mark Fleming, chief economist for CoreLogic. “Although prices should remain strong in the near term due to a short supply of homes on the market, price increases should moderate over the next year as home equity releases pent-up supply.” 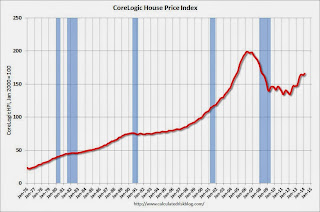 The index was up 0.8% in January, and is up 12.2% over the last year.  This index is not seasonally adjusted, so this was a strong month-to-month gain during the “weak” season. 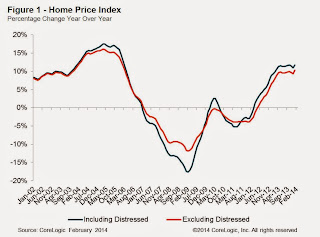 The second graph is from CoreLogic. The year-over-year comparison has been positive for twenty four consecutive months suggesting house prices bottomed early in 2012 on a national basis (the bump in 2010 was related to the tax credit).

However, prices will continue to rise.