The Oregon unemployment rate still sits at the 14th highest rate in the United States.  However, there has been significant improvement since the maximum high rate during 2007.  February unemployment rates did not change much but if we continue to see improvement in the unemployment numbers expect to see a continual growth in spending as we saw in February.  This is a positive sign for our housing market. Regional and state unemployment rates were generally little changed in February. Twenty-nine states had unemployment rate decreases from January, 10 states had increases, and 11 states and the District of Columbia had no change, the U.S. Bureau of Labor Statistics reported today.

Rhode Island continued to have the highest unemployment rate among the states in February, 9.0 percent. North Dakota again had the lowest jobless rate, 2.6 percent.

The size of the blue bar indicates the amount of improvement – Michigan, South Carolina, Nevada and Florida have seen the largest declines and many other states have seen significant declines. 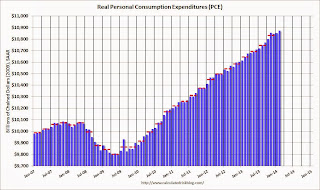 The dashed red lines are the quarterly levels for real PCE.