Not only do men and women seem to hail from different planets, but they approach debt in their own ways, too.

Men tend to accumulate more debt than women and default on mortgages more often, while more females seek out help for debt problems than males.

The differences are not always universal and can appear slight, but understanding them may help couples tackle financial hardships together and find a way out that leaves both of them happy.

“The difference (between men and women) is like night and day,” says Tina Williams, a certified housing counselor with the nonprofit Partnership for Families, Children and Adults in Chattanooga, Tenn. “(But) it will take both to become debt-free and make the plan work.”

Debt and the potential for default

Women appear to shy away from debt compared with men, according to an Experian analysis released in May last year.

On average, men carried 4.3 percent more debt than women. Their mortgages also were 4.9 percent higher than home loans taken out by women. Women tended to use less available credit on their credit cards than men — 30 percent versus 31 percent, the study found.

While men may seem to be more comfortable taking on more debt, they also get into financial trouble more often. Experian found that men were more likely to fall 60 days or more behind on their mortgage payments than women — 5.7 percent versus 5.3 percent.

“Typically, a mortgage is the largest debt that an individual has in a lifetime,” says Rod Griffin, director of public education at Experian. “The way you manage that is very telling of your financial situation.”

“I work with women far more than men. I would say the ratio is about 2-to-1,” says Jessica Williams-Oestmann, credit counseling manager at American Financial Solutions.

Two-thirds of people seeking budget and debt help at ClearPoint Credit Counseling Solutions (formerly known as CredAbility) in the first half of last year were women, compared with just 35 percent of men. Three-quarters of those who signed up for a debt management plan were women, and a quarter were men.

“We often see the women will do almost anything to keep the household afloat. The wife in one case said as long as her family had groceries, she didn’t care about anything else,” says Lea Loethen, a certified credit counselor with American Financial Solutions. “He, on the other hand, seemed to wait to seek help until just before the creditors showed up at the door.”

While no person falls neatly into statistical averages, couples may find solving their financial woes is easier if they understand each other’s money personality, some of which may be driven by gender.

“In counseling, we always walk a fine line to ensure both parties feel their voice is heard and understood, and the result reflects both their desires and goals,” says Williams-Oestmann. “This is not simple and usually involves compromise on both of their parts.” 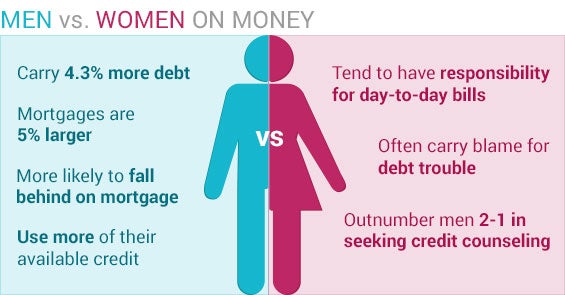 Women more often handle the household budget, paying the bills and spending money on necessary and discretionary items, according to the credit counselors interviewed.

On the other hand, men tend to have a general idea about the budget but don’t have a handle on specifics, such as the monthly expense for child care or the amount of the mortgage payment.

“One husband had no clue what his monthly income was, not how much they spent on groceries, utilities or car insurance, and was constantly referring to his wife for these answers,” says Brian Dooley, another financial counselor with American Financial Solutions. “This is a typical trend in married clients we deal with.”

Because of the day-to-day spending responsibility, women carry more guilt for debt woes, which can be exacerbated if their spouses blame them.

“I’ve heard this more than once from men: ‘It was my wife who was managing the budget month in and month out; now we have to default on something, so I’m taking that over,'” says Mary Ellen Nicol, certified housing counselor at ClearPoint.

Taking a swipe at the household budget

Several of the counselors interviewed said women respond to financial crisis by eliminating things on the household budgets, whereas men work more to increase income to get out of debt. But the best solution may be a combination of both, along with greater financial transparency between the two spouses.

“The advice I would give is to have weekly talks on finances, so each person knows what’s going on,” says Jana Castanon, community outreach coordinator for credit counseling agency Apprisen in Overland Park, Kan.”That’s how to have a successful financial situation for a family.”